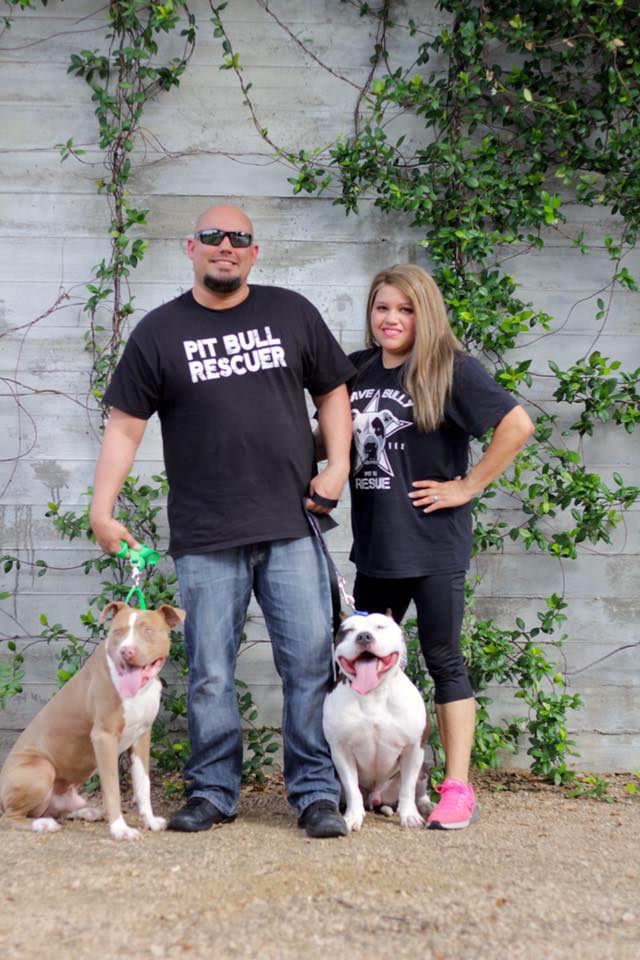 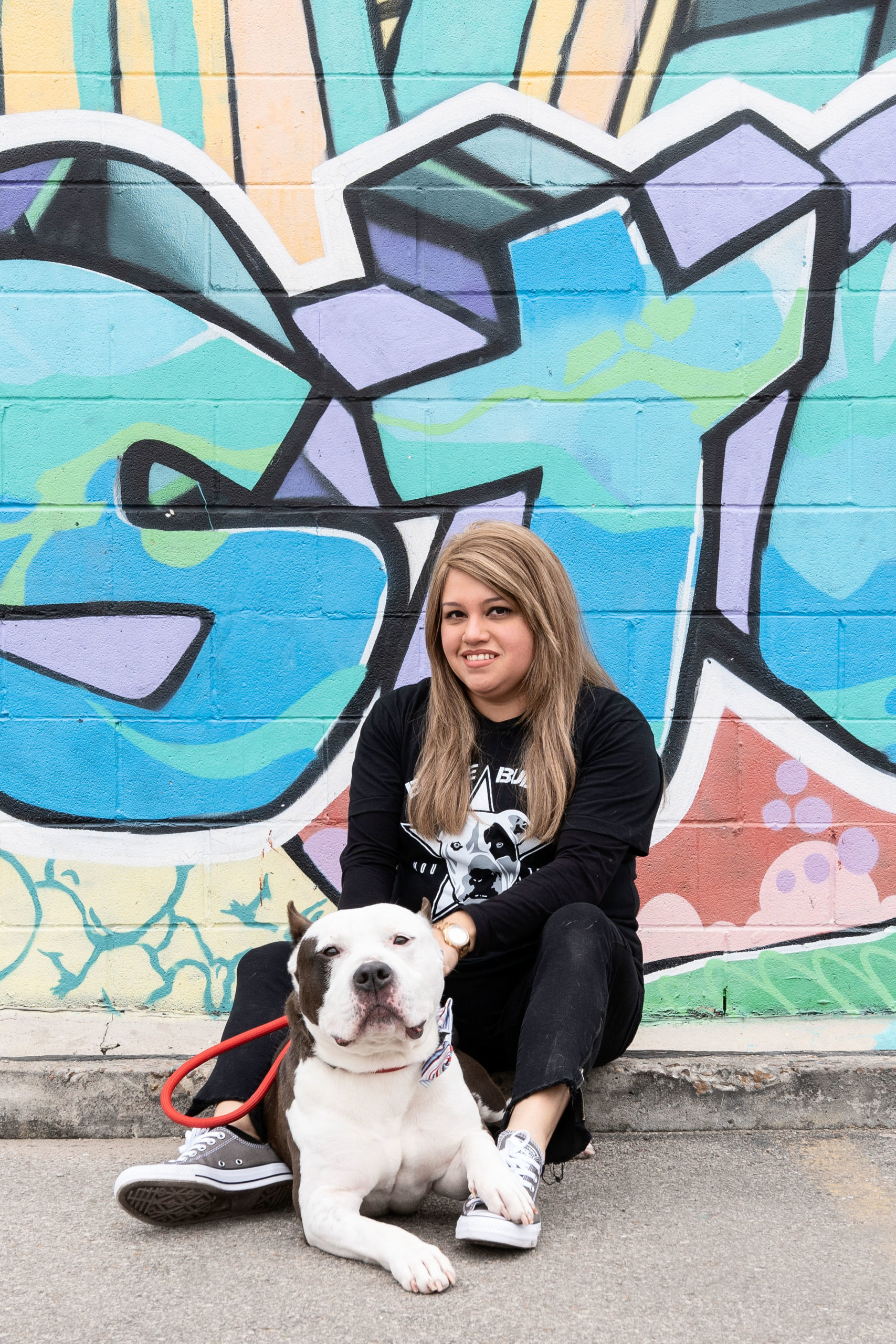 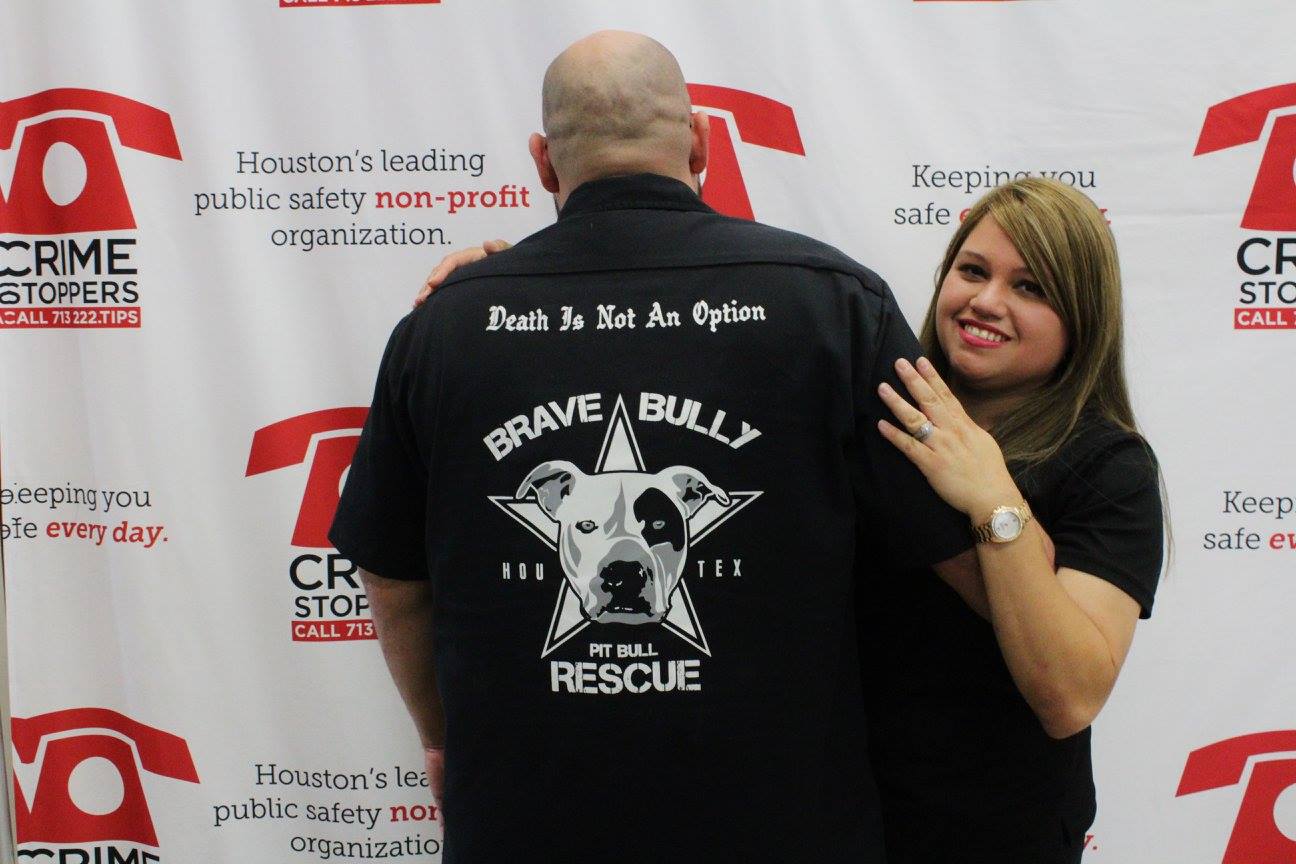 Monica Febles became a Pit Bull advocate when she adopted her first Pit Bull, Mocha in 2002. She has always fought against the negative stereotypes that have been associated with Pit Bull type dogs. Even though she didn’t have her for many years, Mocha taught her the true beauty of the breed.

“My husband and I adopted our first beautiful Pit Bull mix “Kaos” on May 2009 and a year later we welcomed home Bravo, who is now the face of Brave Bully Rescue. Our Passion for this misunderstood breed has driven us to work tirelessly to restore the image of “America’s Dog” to its rightful place. We became aware of the overpopulation and stray problem in Houston, Texas with thousands being euthanized yearly. Shelters and rescues were bursting at the seams! All of this propelled my husband Eric and I to start a Bully rescue.  Together, we founded Brave Bully Rescue on March 14, 2014. We now have three new rescued bullies in our pack, Chance, Ruckus, Tank and Manny! Our rescue works closely with Gray Wolf Canine Rehabilitation in a training program for fosters and adopted dogs. Our goal is to certify some of our adoptable Brave Bullies as “Canine Good Citizen” so they can be great ambassadors to the breed!” 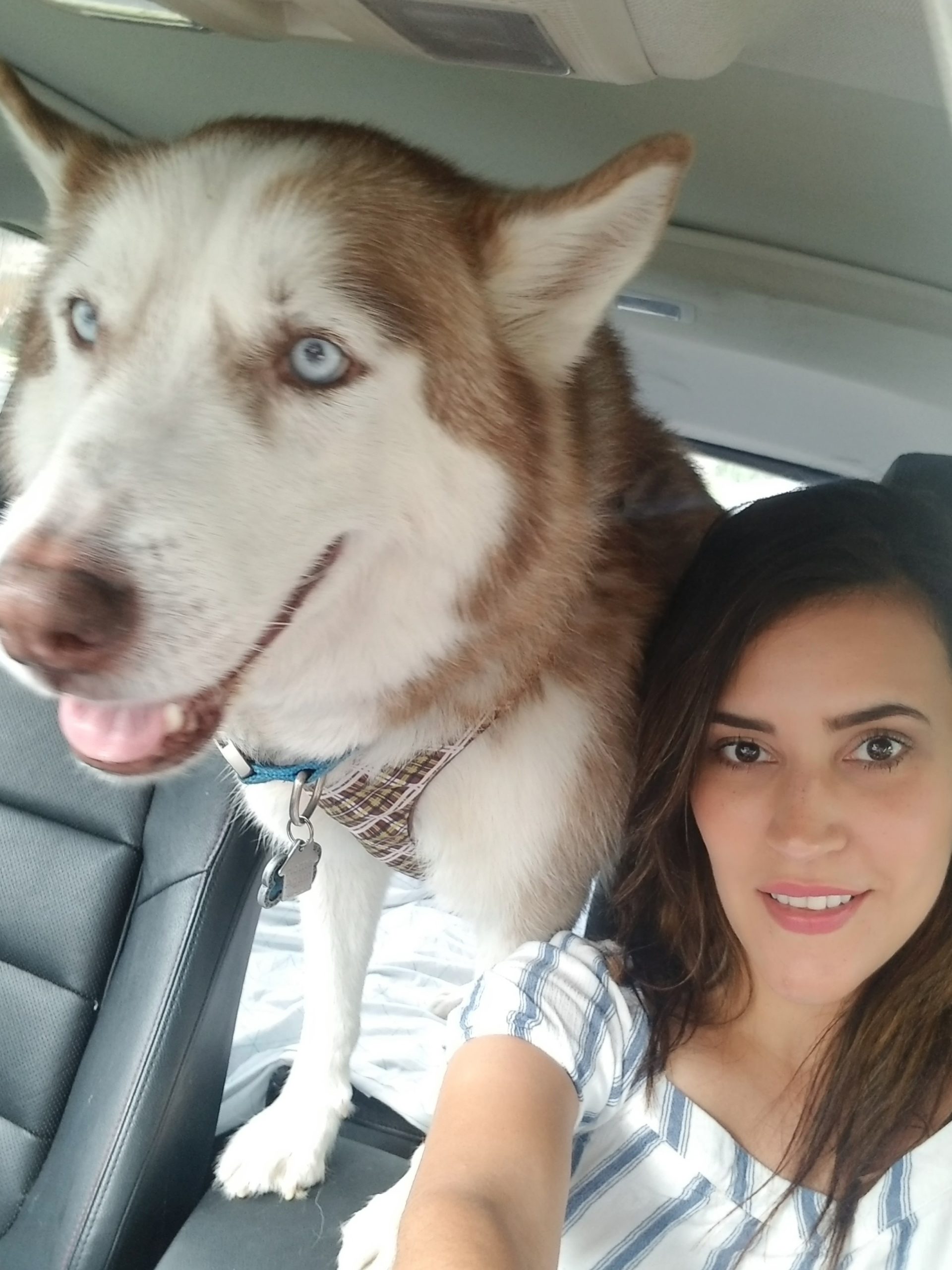 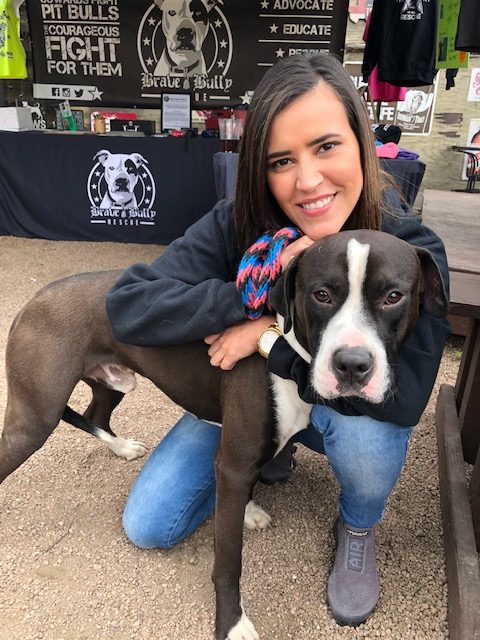 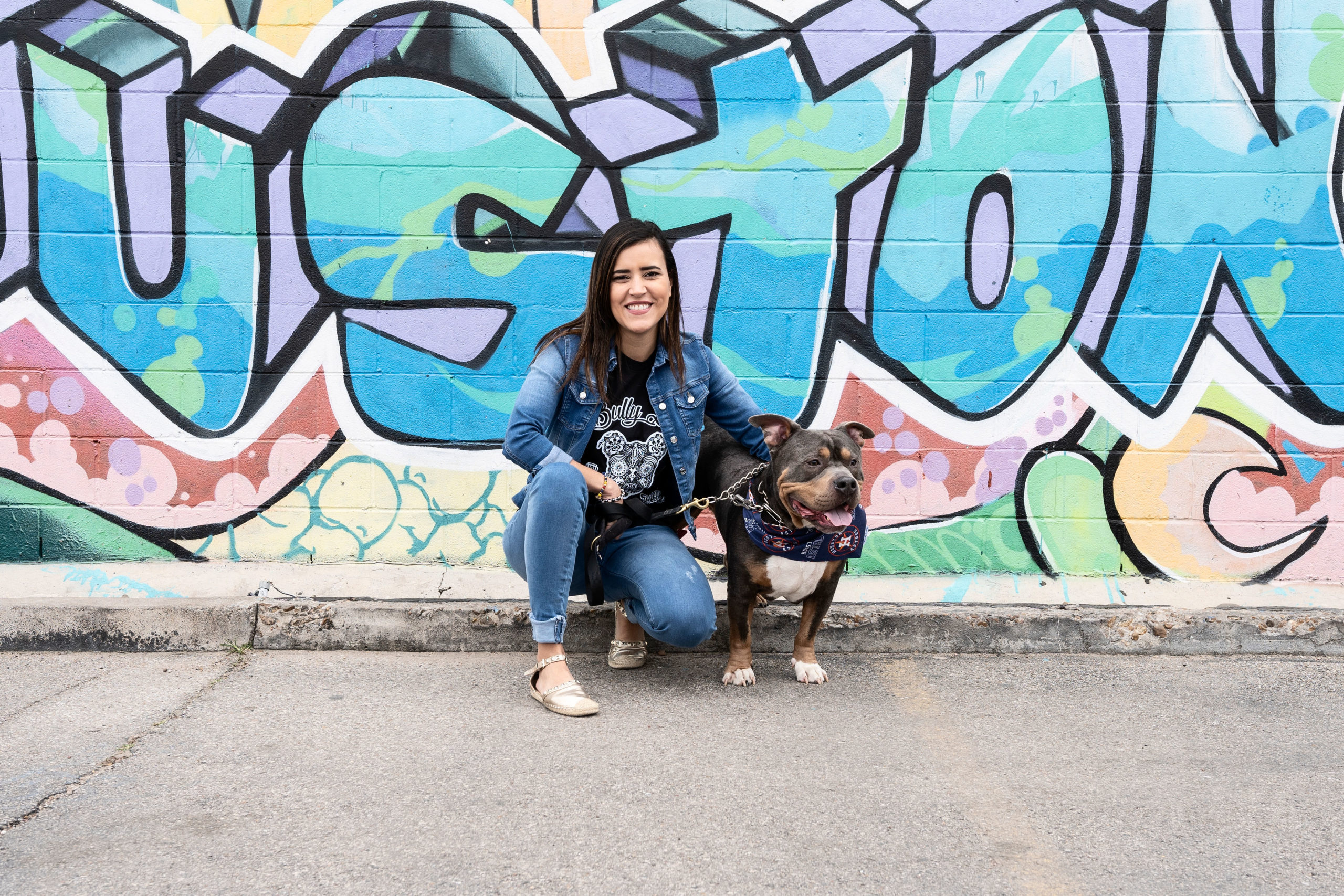 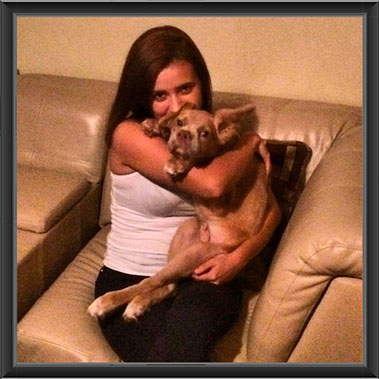 Everyone always asks me why I became involved in rescue. My answer is that animals are my passion! Since I became involved in rescue I feel like I lost my mind in many ways but I found my soul. A year ago I got involved in rescue by pledging and networking dogs.  I met my partner in rescue on Facebook, she too network and wanted to start her own rescue and this is how everything started. One of our first rescues was a dog named Destiny, she was going to be euthanized with her five, two week old  puppies. We were able to help them but unfortunately they got distemper and 3 of them had to be humanly euthanized. The other two puppies got a treatment done to prevent the virus from going into their neurological system but unfortunately one of the puppies, Osito started twitching. I met Oso just a day before he started twitching. When I took him to the vet, the doctor told me he still had a 50% change of survival. I knew Oso didn’t want to die, he was fighting for his life, and I promised him to be there till the end. We both were going to fight together!  Oso got a spinal tab done and thank God he survived distemper. I knew that most people where not going to foster or adopt a dog who twitched. So I decided to foster him, even though I knew he was never going to leave my house. Oso arrived at my house on June 6 of 2014 and just a few weeks later my husband and I decided to adopt him and give him the home he deserved. Osito was doing great but unfortunately a month ago on November 20th my Osito died from an ulcer.  It is because of Osito that I still rescue. He touched my heart in a way no other dog or human has and I want his name and his story to be known forever. Oso was a fighter from day one; most dogs die from distemper but God allowed Oso  to survived and be in my life for 7 months. He had a mission and his mission was to teach me to not reject any dog. It doesn’t matter if they twitch, if they are deaf, blind or have mange, they too can love like no other. Osito was always happy even though he twitch and struggled so much since day one, he taught me to always be thankful and happy for what we have. My mission is to help the more unfortunate dogs, the dogs that most people over look because of their appearance or health, my mission is to help dogs like my Osito.